I love sharing what books I think would translate well into films or mini-series, and part of those visions  stem from how clearly I can see a certain actor as a character. Ever since I was little, I remember running a book’s story through my head as if I was directing a movie, picturing people I saw on TV as those in the story. Even now, some of these visions are so strong that I view any movie adaptation of a book I love warily, because it’s almost as if my own movie already exists.

I wanted to share some of my favorite “casting choices” – the actors I quickly adopted as characters when reading – from books that haven’t had any kind of adaptation yet.  That being said, I think all of these stories would be brilliant as films (it may be a secret desire of mine to write a Millicent Min screenplay).

Fun but irrelevant fact: along with even more irrelevant Keanu Reeves, Mark Harmon and I are birthday buddies! Anyways, I love this book so much, and it’s so personal to me that I’d actually probably hate an adaptation, but it would be somewhat okay if Mark Harmon played Michael. Michael is the strong and steady Amendola patriarch who keeps his most complex feelings inside. Mark Harmon was the clearest vision I had of a character while reading this, and he has a very strong, paternal presence that simultaneously calms and intimidates you, like a dad should at one point or another. 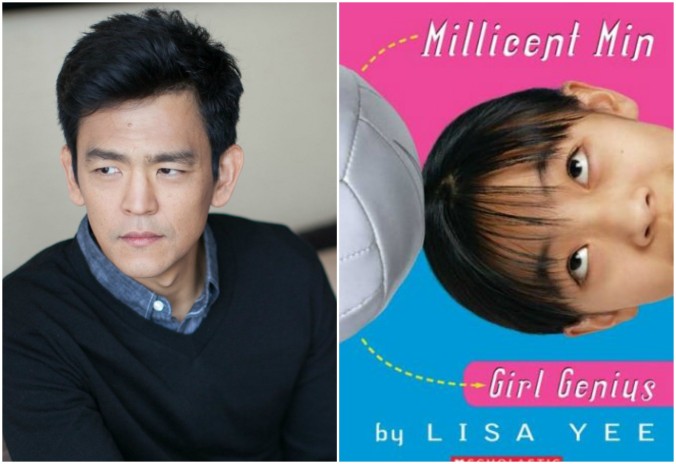 “‘I won’t ever leave you, Millicent.’

‘And I won’t leave you either,’ I promised.

‘That’s a nice thought. But someday you will, when you grow up. That’s what kids are supposed to do. Just don’t be in such a hurry, okay?'”

Growing up, I actually always pictured Joey Miyashima as Millicent’s dad, but at this point, John Cho is at the perfect age for the character if a movie was to be magically cast tomorrow. Again, this is a hugely personal read for me,  because I was such a Millicent as a kid, and my dad also has his goofy moments trying to remind me to not be so serious. John Cho has had experience with both comedy and drama,  so I think he would deliver both the goofy dad and heartwarming dad moments perfectly. This is such a funny and smart book for middle schoolers, and a movie would be an amazing chance for introverted kids who feel different to see someone like them onscreen, and with such supportive parents too!

3. Martin Freeman and Sonya Walger as Douglas and Connie (Us, by David Nicholls)

“The biographies we give ourselves at such times are never neutral and the image she chose to present was of a rather solitary soul. She was not mawkish or self-pitying, not at all, but with the bravado gone, she seemed less confident, less self-assured, and I felt flattered by her honesty. I loved the conversation that we had that night, especially once she stopped hallucinating. I had an infinite number of questions and would have been happy for her to recount her life in real time, would have been happy to walk on past Whitechapel and Limehouse into Essex and the estuary and on into the sea if she wanted to.”

Us is another book I will rave about until the day I die. It holds a special place in my heart because I was actually in London while reading it, and the book would not let go of me until I reached the last page. Douglas, Connie, and the entire structure of this story remind me so much of the film About Time – picture your favorite Richard Curtis film and all of the fluffy feels it gives you, and multiply it by ten to imagine what a Curtis-directed adaptation of Us would be like.

I’d cast Martin Freeman in just about anything, and I need Sonya Walger to have another amazing role just so I stop screaming, “It’s Penny from Lost!” whenever she pops up in something. Martin Freeman could definitely capture the determination yet uncertainty of Douglas, while I totally see Sonya Walger as the carefree Connie. It’d be cool if they could pull off playing the younger versions of the characters, but that just may not be feasible.

“It was hard to think about all his siblings for different reasons, so he didn’t. Right now, it felt like there was nowhere for his thoughts to alight that wasn’t rife with land mines of regret or anger or guilt.”

Confession time: I listen to Pandora while working at my internship, and 99% of the time, I’m tuned into my Hamilton station (which, frankly, doesn’t play enough Hamilton). The station is a glorious modge-podge of musical theater, and a lot of tracks come from the original The Last Five Years recording or the Big Fish Broadway cast album. I’ve loved The Last Five Years for forever, but hearing more of Norbert Leo Butz’s voice in Big Fish (he was also the original Fiyero in Wicked) made me kind of obsessed with his voice. He’s done a lot of TV lately (including Mercy Street!), and both those roles and his stage parts seem to share the need to live up to a certain image. Jamie has to be the brilliant writer, Edward Bloom spends a lifetime being the charming mastermind, Dr. Hale wants to be the best and only surgeon in the hospital. The Nest‘s Leo Plumb has been the entitled oldest child his entire life, and he expects this treatment to continue forever, hence why he becomes quite the destructive adult.

Guys, NLB can make you feel all the emotions – please just listen to any of his songs in TLFY, and you’ll be amazed at how strongly he can convey a story just through vocals. Having seen him in Mercy Street and Broadway interviews, I believe he pulls off being both the charmer and the “villain” so well, which is essentially what Leo is in this book.

What about you? Are there any actors you’ve always pictured as certain book characters? Why those actors?

4 thoughts on “If These Books Were Movies, They’d Star…”