END_OF_DOCUMENT_TOKEN_TO_BE_REPLACED

In high school, before streaming was what it is today and I had my own laptop, summer TV was just that — limited to the physical TV and airing exclusively in the summer season. The fact that these shows popped up when I had the most time to keep up with weekly episodes just made them more addictive, and while only one of them is still in my life today, I still equate all three of these shows with summertime.

Technically, the new season of Married at First Sight is also one of my summer watches this year, but the show has pretty small gaps in between seasons and runs what feels like year-round. Is anyone else totally invested in the Dallas season even though they have a feeling it’s going to be a trainwreck? Ah, well, that’s the beauty of summer shows — they don’t need much to keep us hooked.

1) The Next Food Network Star

I don’t keep up with this right now, but for two or three consecutive summers, I was obsessed. This Food Network competition series is basically what it sounds — finalists compete in cooking challenges with twists tied to being TV chefs in order to win their own Food Network series. Honestly, I think it’s the loss of Alton Brown as a judge that made my interest in Food Network Star fade. Bobby Flay and Giada De Laurentiis still judge, but the visual imbalance of two main judges and not having Alton’s witty wackiness just bores me. The show has low-stakes drama with gratuitous food porn, and you never have to pay much attention to it if you’re just not in the mood to think too much. I’d inevitably form a weird crush on one of the long-haired, slightly greasy-looking chefs that I definitely wouldn’t be attracted in real life. That’s what seeing a man cooking can do to you!

END_OF_DOCUMENT_TOKEN_TO_BE_REPLACED

I’ve been so distracted with work and other writing projects that I’ve definitely been putting off a recap of my June reads. Plus, I’ve delved into such enjoyable books this month in July that the books below haven’t exactly stuck out that much since I finished them. It wasn’t until the end of the month that I realized most of what I read was non-fiction, but it seems that I’ve recently gone through phases of preferring non-fiction or documentaries over literary fiction and TV shows. Anyone else feel that way every now and then?

July has already gone down a significantly different path in terms of what I’ve read. While I’m so excited to eventually share what books I’ve read in the past two weeks or so, here’s what I have to say about the five books I read in June.

From Little Houses to Little Women: Revisiting a Literary Childhood, by Nancy McCabe  (★★★☆☆) 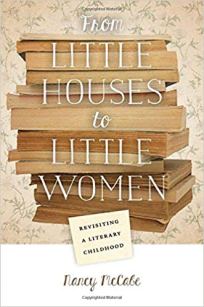 I received this memoir / literary critique for Christmas a few years ago, and while I read about half of it soon after getting it, I never picked it up again. I rarely buy books because of a lack of storage, so I’ve been trying to chug through the stories on my shelves that I somehow haven’t read yet. McCabe’s book follows her adult journeys to the real-life settings of her favorite childhood books, such as Laura Ingalls Wilder’s Little House series, the Anne of Green Gables books, and Little Women. She takes these trips with her young daughter, who is usually quite indifferent to the meaning of these locations, and looks at these classic stories from her grown perspective, often becoming disappointed with how problematic the stories actually were.

Like many girls, I reread the Little House books so much as a kid, but as I’ve mentioned before, I love going back to the Anne books and try to reread Anne of the Island at least once a year. I’m also fiercely protective of Anne Shirley, and McCabe’s critique of those books didn’t sit well with me. I get that, as an academic, it was her job to be critical of the stories, but at certain points, it just came across as too extreme for me. I did like some of McCabe’s insights, though!

END_OF_DOCUMENT_TOKEN_TO_BE_REPLACED

I read so much as a preteen. That voraciousness carried over into middle school, but I have to admit that I was a bit of a risque reader in junior high. I was definitely guilty of reading certain books before being aware of what some of their content even meant or implied. I remember very awkward conversations when my mom discovered that 11-year-old me was reading Are You There, God? It’s Me, Margaret and one of the more adult Meg Cabot books. Cabot and Judy Blume are essentially my literary equivalent of the freethinking, easygoing aunts who will sneak you magazines explaining everything your mom avoids talking about with you. On the other hand, I still got away with reading raunchy-for-a-tween things like the Sisterhood of the Traveling Pants books because of the unassuming titles.

Before those experiments with more worldly material and when I was still in elementary school, I stuck to the innocent, episodic chapter book series that were stocked in abundance at the library. Back then, I reread the same books constantly, out of both desire and boredom. While standalone books and the Harry Potter series dominate my reading memories from this stage, it also included so many middle grade series that are easy to overlook at first glance but were still such a huge part of my reading life. I’m sure I’m not the only one who has fond memories of the often forgotten books below!

I get that the re-design of these covers was an attempt to make the books look less dated, but the fact that the stories themselves are so ’90s is just so charming and hilarious now. You only have to reach as far as one of Claudia’s outfit descriptions to figure out when the series takes place, and that was just one of the many BSC Club charms that kept me invested from about fourth to seventh grade.

Although the series added more main characters in later books, the first few books revolved around three 13-year-old girls who grew up together in their Connecticut suburb. They and a fourth girl, who just moved to town from New York, form a baby-sitting business for local families to use. While the series always focused on their adventures with the neighborhood kids, it also explored the club members’ personal issues, like dating, school troubles, their parents’ divorces or second marriages, and even coping to life with diabetes. I remember coming across many a “where are they now” story during my Harry Potter fanfic-writing days.

I had a special fondness for the BSC Super Specials, which were multi-narrative vacation stories that included trips to Disney World and the girls working as counselors-in-training at summer camp, among other special vacations. There was also the Little Sister series that focused on a baby-sitter’s stepsister in second grade, and before graduating to the main series, I flew through those too.