Much like last year, the recent announcement of Emmy nominations wasn’t even on my radar. After seeing the complete list, I understand why – nearly all of the shows nominated are just not on my spectrum at all.

I was out of the country for last year’s Emmys, so maybe I’m just out of the loop about what’s the norm now, but when did these categories widen to include so many slots? Although it’s great that this allows for more deserving people to be recognized, I almost find it overwhelming, particularly with the categories for Best Comedy and Drama. Although I’m terrible at keeping up with current shows, I do like to have at least some exposure to the nominated works and their actors, and that has become increasingly difficult to do with these kind of nominations.

In true millennial fashion, I rarely watch scripted TV live, but unusually, I don’t normally have access to networks like HBO, and I prefer to wait until a show is available on Netflix with an end date confirmed before I start watching. Catching up with Call the Midwife was a first for me because it’s still running, and now I actually have to wait for the premiere of new episodes. I’ve mentioned this on my blog before, but a lot of my TV watching is starting finished shows that I may have been a little young for during original runs.

Do I still like to debate about why a certain show (*cough* Modern Family and Downton Abbey) was nominated despite a lackluster few years? Do I cheer on a first-time nominee from an unexpected show? Yes. But, because I like to take in popular TV a little more slowly, I’m rarely up to date with currently nominated TV, so seeing so many noteworthy nods is just a tad overwhelming to me.

Now, on a lighter note! For a complete list of Emmy nominations, go here. 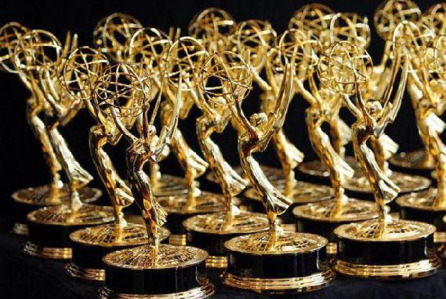 Although I’m not very up-to-date on new TV, I love being a part of the celebration of the industry! What about you? Do you have any favorites you’re rooting for this year?