Weekdays off in elementary school meant watching Live! with Regis and Kelly and giggling uncontrollably at the opening conversation. Now looking at all of these commemorative clips of Regis Philbin, I realize just how much his joy and self-deprecating humor reminds me of my grandfathers, both lifelong, hearty New Yorkers of that age and likely to have experienced the same cultural touchpoints. Sure, America chose to wake him to up, but New Yorkers had a particular familarity with him. Kathie Lee Gifford’s tribute to him on TODAY made me cry, and although I don’t remember the Regis and Kathie Lee era, their occasional reunions on TODAY‘s fourth hour showed me just how magical their daily dynamic must have been. For a laugh, watch Regis’s delight at a bird landing on Kathie Lee’s head and then his Halloween stint as Gelman on TODAY in 2016. I also love his guest spot on How I Met Your Mother.

Either the Queen has an obvious favorite among the grandkids or she feels really bad about Princess Beatrice having to cancel her original wedding plans and deal with Prince Andrew’s shenanigans. Whichever it is, I loved how Beatrice wore an old, tweaked gown of the Queen’s as well as her grandmother’s wedding day tiara on her own big day. I wouldn’t want to wear Beatrice and Eugenie’s wedding dresses, but they both did such great jobs of achieving classic fashion while still adhering to royal modesty rules.

The Parent Trap is one of two or three movies I can quote verbatim, and as her fellow Long Islander, I’m always going to want Lindsay Lohan to be well. How great did she seem in Katie Couric’s cast reunion?

END_OF_DOCUMENT_TOKEN_TO_BE_REPLACED

Happy Christmas Eve! I really loved making a list of my favorite pop culture moments last year, and putting together the same post for 2018 was no exception. Part of the reason why I love the entertainment industry is because it soothes our bad days and distracts us from our individual troubles and the world’s issues. Obviously, there are moments when the field overlaps with politics and international concerns (see: #MeToo), but I love recapping what put a smile on my face throughout the year.

What are some of your favorite pop culture memories from 2018?

1) Prince Harry and Meghan Markle get married, Prince Louis is born, Princess Eugenie gets her moment in the sun, Meghan is pregnant…

…and essentially any positive thing to do with the royal family this year. I’m so over all the reports of drama within the family (brothers are allowed to go through tough times and sisters-in-law never have to be BFFs) and would rather focus on their brighter moments. What other year had two royal weddings, a birth of a prince, and the announcement of a beloved couple’s first baby? While watching Harry and Meghan’s wedding, I even grew more emotional than I anticipated, tearing up at Harry’s reaction to his bride, as well as Doria Ragland watching the two of them together. I cried over some of the New York Times’ more personal event coverage and just spent that whole morning marveling over this amazing addition to the British monarchy. Plus, all of the year’s weddings and babies just meant that we all had more chances to see my favorite royal, Princess Charlotte, be the mini-boss lady she totally is.

END_OF_DOCUMENT_TOKEN_TO_BE_REPLACED

Compared to January, February was a slower reading month for me. I was working a lot and had several night shifts, which swallowed up my usual reading time. The month also completely sped by, which I stupidly wasn’t expecting! I still think people are recovering from their post-Christmas laziness, but spring is just around the corner.

While I wasn’t as satisfied with February’s crop of books as much as I was with last month’s, I feel very optimistic for March! I just discovered the British author Harriet Evans at my library this week, and she writes contemporary women’s fiction primarily set in London and New York, which is right up my alley! I can already sense that some of her books will very easily become favorites over the next few weeks.

But for now, these are the four books I finished in February. 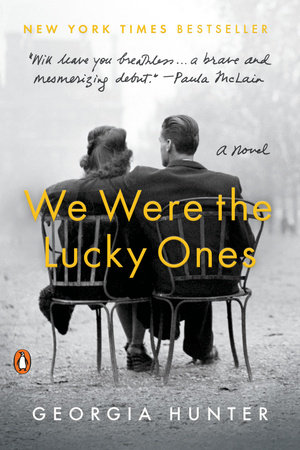 If I could figure out how to make half-star ratings, We Were the Lucky Ones would actually receive 3.5 stars from me. It’s based on the author’s Jewish family’s true experiences in World War II Europe, but to the point of all but one of the characters having their real-life names and there being little to no fictional aspects of the story. It does read like a novel, but jumps forward in time each chapter and includes the POV of nearly every family member.

Despite the nontraditional storytelling, I was definitely invested in finding out what happened in this book and it kept me reading. That being said, chapters would end with characters in very stressful or unpredictable situations, and then the next time you’d hear about the character, it would be anywhere from a few months to a year ahead in time. I think that, although it was very readable, the book did work with too many characters, preventing me from growing particularly attached to any of them individually.

END_OF_DOCUMENT_TOKEN_TO_BE_REPLACED

2017 was a bit of a mess politically and socially. Trump’s tirades, several terrorist attacks, and an onslaught of sexual assault allegations were just some of the difficult moments we faced on a global scale this year. Although it’s important to find a balance between caring enough for the world’s struggles and taking note of your own self care, I’ve always loved entertainment and pop culture because of the relief they provide from sad or negative things.

Despite all of its negativeness, 2017 had plenty of moments that made me happy. I wanted to share my favorite pop culture moments of the year, so get ready to go down memory lane!

Guys, this love story is a made-for-TV movie come to life! But, seriously, I’m hoping for another perfectly cheesy Lifetime flick about them a la William and Kate. Until recent months, I never knew much about Meghan Markle, but I definitely liked the sound of her and her relationship with Harry. After watching their adorable engagement interview, it’s clear that they’re truly in love and that Meghan has already begun a seamless-looking transition into royal life. Try not to smile watching that interview.

END_OF_DOCUMENT_TOKEN_TO_BE_REPLACED

The last few weeks of summer dragged for me, bringing plenty of important but sad news regarding politics and the world, but not enough happy, fun cultural news. Now, just as you snap back into gear for school or work after Labor Day, the past week’s pop culture announcements have been crazy! Given that there’s still a few weeks before fall TV starts, I’m thrilled for the release of so much news to hold me over!

More casting news for next year’s Carousel revival, which I’m so excited for, was released. Betsy Wolfe, who’s currently playing Jenna in Waitress, will play Julie Jordan’s best friend Carrie. Having watched Betsy’s current Broadway.com series and realized how great of a career she’s had, I think she and Jessie Mueller will be great in their scenes together. The two also starred together in The Mystery of Edwin Drood several years ago, and I love seeing old costars reunite for new projects. Carousel‘s marquee also went up this week at the Imperial Theatre, and I think the artwork is so old school and classy. While I’m waiting on My Fair Lady casting news to determine if it’s worth seeing, I’m definitely planning on going to Carousel and seeing this awesome cast!