These are some of my favorite posts to write. As seen by all of the posts filed in my ‘If These Books Were Movies’ tag, I love talking about a certain actor who appeared almost instantly as a character in a book I was reading. I’m attempting to write a novel now, and I’ve loved putting together a secret Pinterest board of the actors I envision as my characters. The dream castings mentioned in this edition were particularly strong and quick to materialize — Hollywood producers, take note! 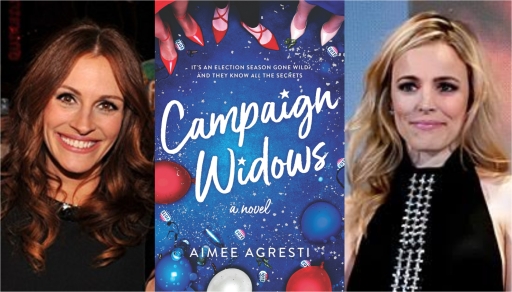 “Talent could protect and insulate you against the world in so many ways, she had always thought.”

A lot of the characters in this ensemble novel actually appeared very clearly to me, but Julia Roberts as a D.C. socialite whose marriage is failing and Rachel McAdams as the plucky TV producer who has moved her life to D.C. for her fiancé’s career were utter no-brainers. Birdie is an older woman whose fabulous campaign parties make up for the personal turmoil she often faces in regards to her philandering husband, while Cady makes the best of her producer job at a local, lowly ranked morning talk show as her fiancé jets off as a staffer on a prospective presidential campaign. Cady reminded me a lot of McAdams’ Morning Glory character, while Birdie just had the composure Roberts has in so many roles.