I keep track of every book I read in a year, so in 2020, I look at this ongoing list and see a clear divide between the books I read while commuting and the ones I read during the stark emptiness of early quarantine. Erin Hahn’s More Than Maybe was a slight crossover between the two stages, distracting me from the rising panic of the New York metro area and introducing me to the delightful world of Luke, Vada, and their dreams to fill the world with music.

While Hahn’s first YA romance, You’d Be Mine, followed the summer tour of teen country music stars Clay and Annie, More Than Maybe picks up in a typical suburb, introducing Luke, the son of a rocker, and Vada, an aspiring music journalist. As Luke hides his songwriting from the rest of the world, he can’t help but like the ambitious Vada, who strives toward getting into a prestigious music journalism program and scoring an internship with Rolling Stone. With the help of Phil, local musical legend and Vada’s mom’s boyfriend, the two teens must learn how their growing feelings for each other fit into the visions that they have for their futures.

On shelves July 21, More Than Maybe was such a delight to read in uncertain times. Luke and Vada’s love of music and their growing trust in each other is reminiscent of Sarah Dessen’s This Lullaby, one of my all-time YA faves. On top of an earnest portrayal of first love, More Than Maybe also hooks older readers with insight into the second-chance romance between Phil and Vada’s mom Mary that is rarely seen in YA. If you sorely miss summer concerts and local hangouts, the story is the perfect antidote for corona blues.

I was lucky enough to ask Erin Hahn some questions about her book ahead of its release. Thank you for being so great, Erin!

After focusing on budding country music stars in You’d Be Mine, what was the inspiration for More Than Maybe and exploring teens with a similar love for music but who are living a more typical life? 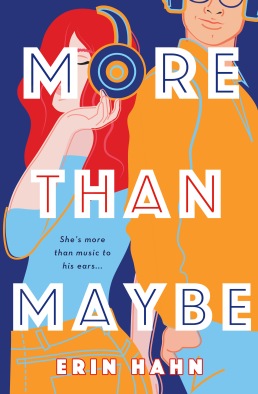 A few years back, a random agent and I were chatting on Twitter about the nineties teen cult classic, EMPIRE RECORDS, and how, as teens, we’d always wanted to work in a record store. From there, we talked about the lack of working teens portrayed in YA and this got my mind whirling. I, like so many others, started working at 14 and had multiple part time jobs throughout high school and college. First jobs are where you often first stretch your wings and are exposed to a more eclectic population of people. For some kids, they don’t find their people in high school, but rather at their first jobs. For Vada, and later, Luke, the dive bar known as the Loud Lizard becomes a sort of surrogate home for them—filled with interesting characters who challenge and support them. And where you find an eclectic array of strangers of different ages and backgrounds working at a dive bar, you’re bound to find music. It’s science.

Both More Than Maybe and You’d Be Mine tackle different perspectives and genres within the music industry. What is it about the music world that encourages storytelling for you?

Music has been a creative catalyst for me since I was a little girl. I would escape to my room for hours and hours, sitting cross-legged in front of my boom box with notebooks of lyrics in my lap. To this day, I outline my stories with playlists first and foremost. I’ll hear a song while driving and a scene will form completely in my brain and I just know I have to write a story around it. Sometimes it’s an especially powerful lyric, sometimes it’s the tone of the artist and sometimes it’s whatever emotion the song invokes in me, personally.

It’s super weird to admit this, but sometimes I’ll hear a song and am so moved by it I can hardly concentrate on what is happening around me and I will realize that it’s not because of ME but rather because of one of the characters I have circling inside my brain. In a lot of ways, MORE THAN MAYBE was my easiest book to write because the dialogue between Luke and Vada came to me without prompting. I didn’t have to research all those songs. They’ve been in my brain waiting for these two dive bar kids for YEARS.

As I said. Super weird, but alas.

Real songs play a major role in the way Vada and Luke grow closer. In your writing process, do you actively seek out songs to feature or does that discovery happen naturally? Is your writing ever influenced by other types of art?

Ah, see? I sort of answered this, but yeah. It’s all there in my brain. Naturally. Playlists are my superpower. These songs have been waiting years for this moment to shine. I did work super hard on balance in this story. I wanted to make sure I featured an equal number of older, more classic songs and brand new, up and coming artists. Since Vada is a music critique blogger with big ambitions of Rolling Stone, it was important that she knew about all kind of music, not just what is on the radio today. She needed to have educated opinions about music of all genres. Luke, being the son of a former British punk rocker from the ’80s and ’90s, was a good match for that. He’s also well-versed in the classics. 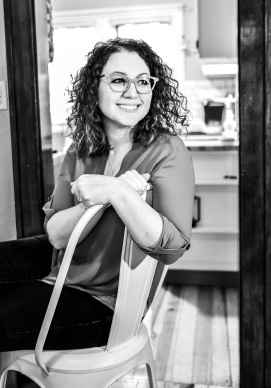 their Google app while reading. I knew it would be impossible to expect everyone (particularly non-music lovers) to know all of the songs and artists, but I hoped to tease the songs enough that people would want to check them out for themselves after reading a conversation between Luke and Vada. I hope I’ve achieved that. I think I have! Nothing makes me happier than when an early reader has reached out to say they’ve been following along with the music in the story and or creating their own playlists. I’ve got my official playlist set up on Spotify, but when readers create their own? Amazing. I love it.

As for other art? Vada is also a dancer in this story. I danced for eleven years, though it’s been… a while. In order to write her scenes, I’ve studied a of clips of modern and contemporary dance styles to get the right feel for her movement. It’s remarkably challenging to write those scenes in a way that I hope translates into the reader’s brain!

The love story of Phil and Mary weaves throughout the ongoing story of Vada and Luke. While writing, did you ever draft a version of Phil and Mary’s history in more detail? Why was fleshing out this adult relationship in a YA book important to you?

Not outside of my head, but I adore their story so much. So often in YA, the parents are terrible or selfish or not in the picture at all. In my first book, this was certainly the case, and while it’s not unrealistic to say some parents aren’t great, just as many parents are, in fact, pretty wonderful. When it came to Phil and Mary, it was very important to me to show that while Phil isn’t Vada’s father, he is a solid, loving and providing figure in her life. In a way, he’s all the more special because he chose Vada and her mom Mary. In the same way, Charlie and Iris Greenly are pretty spectacular parents. Sure, Charlie fumbles, but that’s real life.

As I get older and my kids grow, I see myself more in the parents than the teens I write for and it’s clear to me that WOW! The parents are just doing their best! They aren’t the clueless, boring jerks they are so often portrayed to be. They have feelings and hobbies and romances too! They often care about their children, even their nearly-grown children, more than anything else in their worlds, and are just juggling the balance of letting their kids make their own choices and allowing missteps to happen. The important part, to me, is that because of these solid and loving adults, Luke and Vada are able to move forward with a healthy relationship themselves.

Part of the appeal of reading YA as an older person is the nostalgia and reflection about that formative stage of life. Through writing Vada and Luke, what’s something that you learned about your teenage self or yourself now?

I think for some teens, including Vada and myself, it feels like there aren’t second chances. Like, you have to have everything figured out and lined up just perfectly and if it fails, it’s over. That’s it. There is no possible “other way” that something can go down and still work out. I love how Vada’s mom, Mary, tells her at one point that “the best things to happen in my life were unplanned”. That’s SUCH a thing that I didn’t understand as a teen.

If you had to pick three songs that sum up More Than Maybe, what would they be?

Great question! I have a whole playlist you can listen to on Spotify, but the top three would have to be “Thank You” by Led Zeppelin, which is the first song Vada sends to Luke (sending him into a very cute existential tailspin), “Just Like Heaven” by The Cure, which is a song they dance to, together and “I’m With You” by Vance Joy. Luke sends it to Vada at one point and it was one of the first songs to inspire their story. I think it fits just so super well with the way these two kids feel about each other—through thick and thin, they stick together against it all. I tried for ages to make it the title of the book, but… I’m terrible at titles. ☺

What advice do you have for people who want to incorporate their passion for another art form into their writing?

Just let it happen. I remember how desperately I wanted to write music books and I fought it for years because I allowed other people to talk me out of it. I thought I needed to be a hardcore music journalist to qualify and that no one would read my books if I put too much music into them because music can date a book or ostracize some non-music lovers. So often as authors are getting started, we dull down our creativity to one-size-fits-all. We worry that no one will want our (*insert specific hobby* here) story and focus all our efforts on something broad and encompassing. And that’s perfectly okay! But, for me, my one-size-fits-all stories weren’t working. I couldn’t find the fire to fuel my characters. I needed music. I’ve always needed it, personally, and once I allowed it free reign in my stories, I found my flow. The characters came out more rich and opinionated. The tension and romance all bloomed. I think I needed to find my passion for my characters to find theirs.

What are you working on now?

I have a third YA romance out next year, featuring Vada’s best friend, Meg Hennessey. Meg finds out that her entire ultra-conservative childhood has been based on an epic lie. Rather than taking a gap year to find herself, she decides to travel north to meet the family she never knew existed. While there, she meets Micah Allen, a former Pastor’s kid who has his own conflicted feelings about the Church, as his dad is in prison for swindling his congregation. The two battle their fuzzy and complicated pasts while trying to forge a solid future together. With kissing. Lots of kissing. ☺