I’ve read a lot of nonfiction lately, but the novels I have read have had characters who instantly match with a certain actor in my mind. I love thinking of actors whose looks or past roles just immediately link to characters in a book I’m reading. My “If These Books Were Movies” posts are some of my favorite to write, and I can never resist adding another blog to that archive!

If this is the first “dream cast” post of mine you’ve come across, check out the tag for the series here!

1) James Norton as Liam Finucane (The Jane Austen Project, by Kathleen A. Flynn)

“We are just vessels. The art is eternal.”

I was totally crushing on Henry Austen in this time travel story, and although I never fully got over him, Liam is quite the stoic charmer. He’s an actor-turned-academic, and as he and Rachel begin their mission in 1815 to find a lost Jane Austen manuscript, he’s quite unreadable. It’s not until the mission intensifies and the two grow closer while posing as siblings that their goal becomes a tad more far-fetched.

Admittedly, I’ve only ever seen James Norton in the snippets of Grantchester that pop up on my Instagram feed (I follow the PBS and Masterpiece accounts). But he’s so handsome, and he fits that Mr. Darcy-esque persona of a reserved Englishman who’s really brewing with passion inside.

2) Saoirse Ronan as Bella (We Were the Lucky Ones, by Georgia Hunter)

“What matters, she tells herself, is that even on the hardest days, when the grief is so heavy she can barely breathe, she must carry on. She must get up, get dressed, and go to work. She will take each day as it comes. She will keep moving.”

Based on a true story to the point of every character but Bella having the same name as their real-life equivalent, We Were the Lucky Ones is about members of a Jewish family in Poland who are scattered across the world when World War II breaks out. Bella is the teenage sweetheart of the family’s youngest son, Jacob, and she finds her own way through war-ravaged territory to where Jacob has been stationed after the disbanding of the Polish army. Amidst the uncertainty in Europe at the time, the only thing the two are confident in is their relationship, and they work to ensure they always have each other.

The structure of this book makes it difficult to feel attached to one particular character, but given Bella’s age and her storyline, it was easy to connect her with Saiorse Ronan. I know she’s appeared in dystopian and otherworldly movies before, but to my knowledge, she hasn’t done a period film as an adult in which her character deals with war.

3) Helen George as Frieda (The Bookseller, by Cynthia Swanson) 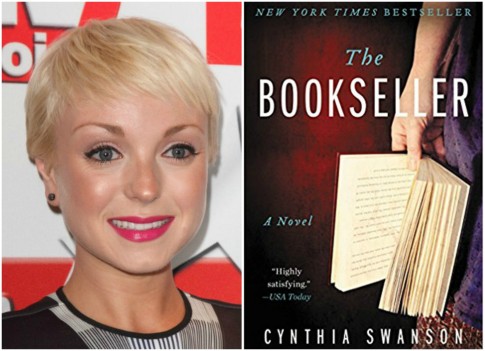 “What smart, successful man wouldn’t take notice? The only reason it hadn’t happened earlier, I tell myself, is because of chance. Up until now, pure chance had not put her in the right place at the right time.”

Helen George plays Trixie, who is, if not my favorite, one of my most beloved characters on Call the Midwife. Similar to Trixie, Frieda is the narrator’s glamorous best friend in The Bookseller who, like the main character, has remained an old maid in her late thirties. While Kitty, the narrator, begins to have scarily realistic dreams in which she is a wife and a mother, Frieda looks into plans to move the friends’ small bookshop to a busy, modern shopping center. In Kitty’s dream world, Frieda has embraced a very different career path that has put a wedge between them in this alternate life.

Julia Roberts has been announced to play Kitty in the book’s film adaptation, which means that my younger-looking visions of the characters definitely won’t carry through to a movie. But I think Helen George would totally have the capacity to be the slightly jaded Frieda and portray her determination to bring their store to the next level. As seen with her playing Trixie, she can simultaneously be the lighthearted flirt and the battle-scared expert.

What about you? Have any actors recently popped into mind when you read certain books?

3 thoughts on “Yes, Even More “If These Books Were Movies…””