Some of my favorite blog posts are about my wish list casting of the book-to-movie adaptations I’d want to see someday (here, here, and here). I loved putting together this one, which leans a bit more on the fantastical side than the realistic one. Nevertheless, here are my most recent picks for what actors could play certain book characters in a movie!

1. Christy Altomare and Corey Cott as Amelie and Jack (The French War Bride, by Robin Wells) 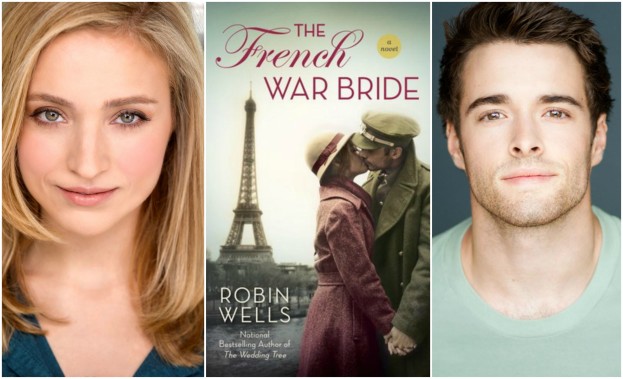 THIS BOOK. I devoured it in two days and didn’t want it to end – totally my favorite book of the year so far. If you love fiction set during World War II, this is a must read for you. It explored France’s war years in such an immersive way that I was exposed to several facets I didn’t know about before, and I’ve read a good amount of historical fiction set in 1940s France. Part of its gripping narrative was due to the narrator Amelie. The book follows her from the war’s beginning to what she does after the German surrender, but also flips between her past and 2016, when she shares her story with her dead husband Jack’s ex-fiancee.

Having seen Christy Altomare in the Broadway musical Anastasia, I think she is amazing at portraying emotional conflict and has a voice that works well in period pieces, if that makes sense. I totally fell in love with Jack for his all-American, sheer goodness, and Corey Cott, who I saw in the musical Bandstand, fits that to a T through both persona and looks. Since these two aren’t primarily TV and film actors, the likelihood of this dream casting is slim, but I pictured them as the characters so strongly while reading the book.

2. Martine McCutcheon and Gloria Hunniford as Carmen and Rose (The One You Really Want, by Jill Mansell)

Once you started smiling and saying hello to your neighbors you ran the risk of falling into conversation with them…And from then on you really were on the slippery slope to getting entangled with the kind of people you really didn’t want to be entangled with and knowing that all the time they were talking about you behind your back.

Martine is best known as Natalie in Love Actually, but she’s currently a panelist on the British TV show Loose Women, which is basically the UK’s version of The View. Gloria Hunniford, known in the UK for her singing career, is also a Loose Women panelist (here’s a photo of them on the panel together). I discovered the Loose Women YouTube channel this summer, and since I’m an Anglophile obsessed with British TV (I even took a British Broadcasting class with a former BBC journalist when I studied in London!), keeping up on its clips is my latest guilty pleasure. Familiarizing myself with different regional accents and British vernacular is another reason why I love watching the show.

In The One You Really Want, Carmen is ready to start dating after the loss of her husband several years before. Her husband was a famous musician, so she attempts to hide her identity when volunteering at a homeless shelter to avoid others’ sympathetic distance. Martine strikes me as the perfect actress for a plucky, quick-thinking English girl. Rose is Carmen’s best friend’s mother who moves into Carmen’s London home along with her daughter. She’s the most adorable, hilarious old lady who goes about befriending the neighborhood. Gloria is a very refined-seeming Irish lady who has this surprisingly wicked sense of humor on Loose Women, and I think she’d be great in a comical role like Rose!

3. Nicole Kidman as Vianne (The Nightingale, by Kristin Hannah)

Men tell stories. Women get on with it. For us it was a shadow war. There were no parades for us when it was over, no medals or mentions in history books. We did what we had to during the war, and when it was over, we picked up the pieces and started our lives over.

I read The Nightingale shortly after The French War Bride, so it fell a little flat for me, but it was still great. I think older sister Vianne is supposed to be in her thirties, but movie magic can certainly make Nicole Kidman look the character’s age, right? Compared to her much younger sister, Isabelle, Vianne is initially a very cautious, reserved schoolteacher immersed in her country life with her husband and daughter. When France enters World War II and her husband leaves to fight, Vianne must run her household and take in Isabelle, who is rebellious and wants to join the French Resistance. As the country’s state worsens, Vianne must house a German solider, and her sister eventually leaves to join the resistance movement in Paris. Ultimately, she does her own part for the war effort, becoming more resistant and powerful as the years pass by.

I don’t think this choice needs much explanation. Nicole Kidman is incomparable, and as evident by her recent role in Big Little Lies, she has a passion for women’s stories. As much as I was hoping for her BFF Reese Witherspoon to option this book for her production company, Wikipedia says that a film adaptation is already set to release in 2019. Hey, casting directors – I actually envisioned several people who could play characters in this adaptation (hint, hint). Brendan Coyle as the girls’ father (maybe with severe age makeup), Ben Barnes as Gaetan, and Goran Visnjic as Antoine. Just some suggestions.

What about you? Who have you pictured as characters in recent reads?

3 thoughts on “More “If These Books Were Movies…””