This post has been a long time coming since I saw the new Broadway musical Bandstand in previews back in April. Now with the show’s cast recording out, I’ve listened to a few songs recently and I think the show’s effect has finally sunk in for me. So, I’m ready to share my opinions on the show! Keep in mind that because I saw it in previews (albeit later in its preview run), there’s a possibility that some of its elements have changed since I was in the audience. 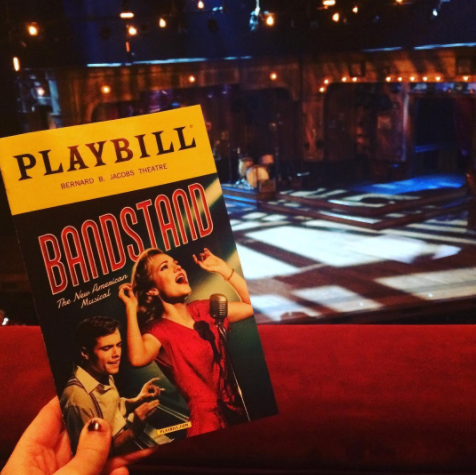 Going into the experience, I was really excited because I love the show’s World War II era. If I’m reading historical fiction, there’s like a 95% chance it’s set in the 1940s and exploring the before, after, or immediacy of the war. I also love hearing about the American homefront during the war, probably because I read so much about Europe in that time and there isn’t a huge literary focus on the States. I also adore Glenn Miller-esque music, which was a huge selling point of the show for me.

Originally produced at Paper Mill Playhouse in New Jersey, Bandstand presents a group of young WWII veterans returning home and dealing with the mental effects that the fighting has caused. Compared to now, the idea of PTSD is virtually nonexistent, and the men feel even more isolated from their homes because of such a lack of understanding these mental changes.

Donny Novitski, fiercely played by Corey Cott, is a musical prodigy struggling to find success in a post-war Cincinatti. He meets Julia Trojan (Laura Osnes), the widow of his best friend from the army, and befriends her. The two grow closer when Donny comes across a swing band competition honoring troops and enlists fellow vets and Julia to create an all-veteran group. The rest of the show explores their quest to reach the finals of the national competition while coping with the war’s emotional aftermath.

Even while watching the performance, I couldn’t wrap my mind around how incredible the choreography was. Hamilton choreographer Andy Blankenbuehler worked on Bandstand‘s dancing (and directed the show!), and you could totally see what I now assume are his token moves. There was one particular moment when the men of the ensemble were slowly moving chairs around in the air, and my mind screamed Hamilton.

I love the movement of old, dance-heavy movie musicals – think Fred Astaire and Ginger Rogers – and this dancing felt very reminiscent of that, but was also intensified to a level that left me in such awe of the dancers. I knew right away that this show had the greatest chance of winning the Tony for Best Choreography, and it did!

At the time, the dancing was undoubtedly my favorite part of the show, and I wasn’t blown away by the story. Apart from Donny and Julia, the other characters aren’t explored too deeply. Each of the men in their band deal with their own unique demons after returning from war, and their emotion sort of culminates in Laura Osnes’ big eleven o’clock number, but not so much that I felt very familiar with these supporting men.

Act 1’s songs didn’t stick with me very well, but the music vastly improved in Act 2 (Chelsea Clinton seems to agree). It kicks off with the number seen above at the Tonys, “Nobody,” which covers the band trying to earn enough money to finance a trip to nationals in New York. The number that wowed me the most technically was “A Band in New York City,” conveying the group’s trip to the city and first exploration of the area.

The show’s standout moment, even in previews, was absolutely the finale version of “Welcome Home.” I won’t go into story details, but the song essentially builds on everything revealed about the band’s men throughout the show and enlists brilliant lighting techniques to strengthen its delivery even more. Laura Osnes is phenomenal in this song, and I could see her face completely struck with emotion while singing it. Knowing that she performs this every day is insane. If you’ve heard anything about seeing this song live, you’ll know that it often warrants a standing ovation, and its place in the story actually allows this to happen without disturbing anything else. A few people did stand and applaud at my performance, and that was the moment when I realized that Laura was potentially award material simply based on this song.

While she had her shining moment late in the show, Corey Cott really impressed me throughout. Before this role, I think he was pegged mostly as the boyish lead rather than a leading man (probably thanks to being Jack in Newsies). He obviously still looks pretty young, but the complexity of this show allows him to flourish in a previously unseen way. His vocal power is tremendous, and the way he acts out Donny’s post-war weaknesses is incredible. He also casually learned how to play piano for the role, as we all do, right? (The other men in the band also play their own instruments onstage). Together, he and Laura are great leaders of this company.

Overall, I’d recommend seeing Bandstand if you have veterans in your family, love the music and dance styles of the 1940s, or have fangirled over Laura Osnes forever. If you need a recommendation from someone a lot more qualified than me, just check out Lin-Manuel Miranda gushing about it on Twitter.

Have you seen Bandstand? What other musicals from this season are you most excited about?

One thought on “A Reaction to Broadway’s ‘Bandstand’”