If you’ve seen any of my shoutouts to Eleanor Brown’s The Weird Sisters (here and here), you’ll know that I have a habit of casting book characters in my head and sticking to that vision fervently. With The Weird Sisters, I envisioned Amy Adams, Rebecca Mader, and Jessica Chastain as the three sisters. All of them are known for sporting red hair at one time or another, and I think they could totally pass as sisters.

I’m definitely someone who likes physical resemblance with onscreen family members (Tina and Amy, I love you, but really?). Disney did a particularly good job casting the family in Wizards of Waverly Place, and the Weasleys remain one of the most believable-looking families to me. So, because I’m a nerd, I wanted to share a list of some actresses I wish would play family members in a film!

This quickly turned into a list of actresses I want to play sisters together. I guess I just have a soft spot for sister stories, having two sisters myself!

Throughout The Force Awakens, I was constantly reminded of Keira while watching Daisy act. I could see them as Elinor and Marianne in a Sense and Sensibility remake (the original also has a great pair of believable sisters) or any kind of period work.

My absolute dream sister pairing. If this ever happens, I can die happy. Just look at them in this photo! Their dresses even sort of match.

Maybe it’s something about the wide foreheads, but I see these two as fraternal twins in a movie. They’re not too far apart in age either, so I think them appearing in a coming-of-age film together would be amazing. Maybe they can pick up American accents to be in an adaptation of Fangirl?!

This has probably been done before, but I see Elizabeth being the perfect, put-together sister who’s getting married and Sarah as the younger, more neurotic sister who just wants to be a good maid of honor but Elizabeth has it all under control. I also just love Elizabeth as Juliet on Lost, and I feel that she deserves a fun role like Sarah has had on Scrubs and HIMYM. 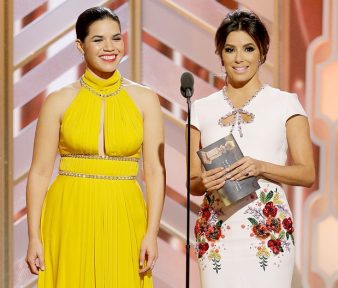 Yes, this was totally inspired by their co-presenting at the Golden Globes (how awesome were they?!). There is an age gap of almost 10 years between them, so I picture Eva as the big sister who has settled into her adult life, whether that be through a career, family, or both, and America suddenly having a crisis when trying to reach her goals and turning to her sister for some guidance.

Is it just me who likes to imagine film families? Are there any actors or actresses you think can pull off being siblings?

3 thoughts on “You are Family (Because I Said So)”